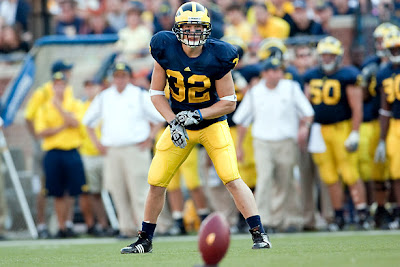 Raise your hand if you knew Kovacs would contribute in 2009.

Put your hand down, Mrs. Kovacs.

Jordan Kovacs wasn’t even the most-hyped walk-on safety going into the 2009 season. That title went to Jared Van Slyke, a transfer from Southwest Missouri State and the son of former Pittsburgh Pirate Andy. When starting safety Michael Williams got hurt in the Notre Dame game, I’m sure I wasn’t the only one saying, “Who in God’s name is #32 and why is he on the football field in a close game?!?!” That nobody was one Jordan David Kovacs, a student body walk-on who was just recently recovered from a bum knee that prevented him from making the team when he tried out the year before. Kovacs took over a starting safety job in the Indiana game and never relinquished that role, although he bounced back and forth between free safety and strong safety. He ended the season as a Freshman All-American and finished second on the team in tackles, including 17 tackles against MSU.

This year Kovacs is all but guaranteed a starting job, most likely at Bandit, which is a strong safety-type position. Michigan will essentially be running a 4-2-5 defense in 2010, and that Bandit position will have deep third or deep half responsibilities at various times. This concerns me, as Kovacs has physical limitations. He’s somewhat small-ish at 195 lbs., but that isn’t the worst part; his lack of speed was obvious against teams like Indiana and Penn State, in which long touchdowns may have been prevented if he were more athletic. Still, Kovacs is a fearless and determined tackler and usually positions himself in the right place. I can’t picture someone with Kovacs’ physical limitations starting through the 2012 season, when he’ll run out of eligibility, but for now the youngsters behind him (potentially Vladimir Emilien, Carvin Johnson, Marvin Robinson, Ray Vinopal, and Josh Furman) will watch and learn from Michigan’s best rendition of Rudy in recent memory.