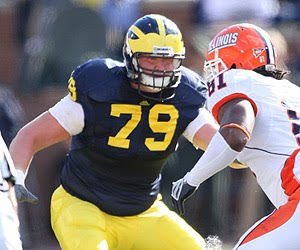 I’ve never been extremely high on Dorrestein, so let’s get that out of the way. He’s not extremely athletic for a left tackle, and he’s too tall to play much guard. I’ve thought of Dorrestein as backup material in an ideal world, and he indeed began last year as a backup to Mark Huyge. At best I think he’s an adequate right tackle. So while I’m not in the Dorrestein-for-starter camp, that doesn’t mean that offensive line coach Greg Frey and Rich Rodriguez aren’t high on Perry. He played 11 games at tackle in 2009, starting 8 of them.

This year the fifth-year senior is in another battle for playing time, this time with redshirt freshman Taylor Lewan. Dorrestein has bumped over to the left side to protect the quarterbacks’ blind side, but he missed some time in the spring due to a back injury that has lingered in part over the summer. When fall practices begin today, this will be one of the most heated position battles on the field. Lewan is an up-and-comer, but according to a source, it’s Dorrestein’s spot to lose. I think that an injury or lack of production will move Lewan into the starting lineup by the end of the season, but Dorrestein is perhaps the lowest ranked starter because he has a backup who’s roughly equivalent. All other things being equal, I’d rather the senior get playing time to reward him for five years of hard work. I’m just not sure if it will work out that way in this case.

Prediction for 2010: Starting left tackle to begin the season, but watch for the back injury to flare up