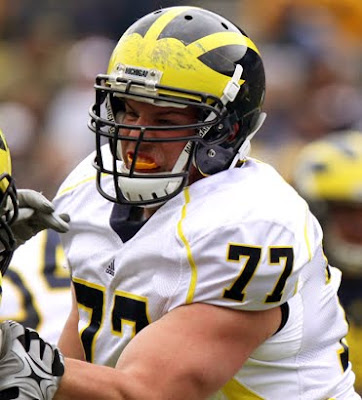 Lewan came in last year and was in the 270 lb. range. He was a highly touted prospect by the end of the recruiting cycle, shooting up the charts after switching to offensive tackle from defensive end. His high school highlights are chock-full of him blocking fools until the echo echo echo of the whistle. Despite incredible talent, that lack of size prevented him from competing for playing time last year. But reports from practice said that defensive players hated playing against him because he’s nasty and never stops blocking. Among others, he and Greg Banks got into a scuffle when Banks took umbrage at some of Lewan’s tactics.

Naturally slotted at left tackle, Lewan will battle senior Perry Dorrestein for playing time. According to a source, it’s Dorrestein’s spot to lose, although Perry has been fighting a back injury for several months. There’s also a chance that Lewan will outperform him in fall camp to win the starting job. It’s bound to be a battle to the end, but I’m giving the edge to Dorrestein for now. Lewan is ranked this highly because a) he’s nearly neck-and-neck with the “starter”, b) injuries are common on the offensive line, and c) starting tackles Dorrestein and Mark Huyge could slide inside to guard if Patrick Omameh or Steve Schilling gets hurt.