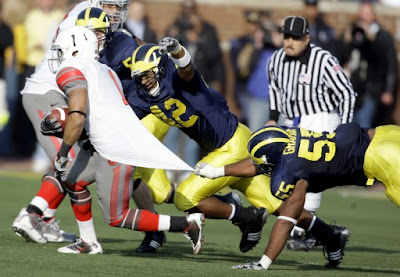 A silly failure to properly use a redshirt year makes J.B. Fitzgerald a junior this season, giving him just one year to replace presumed 2010 starters Obi Ezeh or Jonas Mouton. I know this isn’t PlayStation, but would you rather have Fitzgerald make 8 tackles (6 on special teams) as a freshman, or would you rather have him as a fifth year, two-year starter in 2012? Fitzgerald has played in a mediocre fashion the past two seasons, but inside linebacker is one of the most difficult positions on the field to adjust to from one level to the next. Not only is the middle linebacker a signal caller for the defense, but a split-second hesitation is the difference between making the tackle for no gain or getting gashed for a big gainer up the middle.

Fitzgerald wasn’t great in his limited playing time at inside ‘backer in 2009, but he wasn’t awful, either. The coaches seem to be gaining confidence in him, and in the spring, he was the #1 backup at all three linebacker positions – Roh’s, Ezeh’s, and Mouton’s. That’s partly due to injuries and a lack of depth, but there must be a reason that Fitzgerald has been entrusted with reps at all three positions, and not, say, Kenny Demens or Isaiah Bell. Fitzgerald has the size and speed to contribute at any linebacker spot, and he’ll get the opportunity if any injuries befall the starters. I expect Ezeh and Mouton to blossom this season, so Fitzgerald will be a special teams kamikaze and a key backup once again. But as I said last year, he’ll be a solid starter once those two seniors graduate.