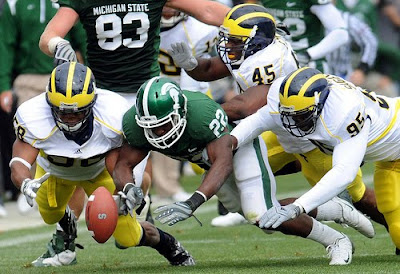 Sagesse is one of those guys that you feel for a little bit. He’s a big guy and a solid talent. He could probably be a starter and the defense and the defense wouldn’t miss a beat, but he’s not a star player. He’s been essentially the same player now for three years, and while I don’t expect a giant leap forward from him in 2010, I do expect him to continue his consistency.

He offers some versatily in that he can play nose tackle and defensive tackle. In fact, he played 3 games at NT and 6 games at DT last season. But Michigan didn’t lose anyone from the interior defensive line, and Sagesse remains a backup. Fellow lineman William Campbell was more highly touted, but also lacks consistency. Both will get plenty of time on the line, but right now, I believe Sagesse to be the more solid player. Sagesse’s final season should be virtually a mirror image of his junior year – maintaining his gap, making a smattering of tackles, and being a good glue player for the Wolverines.