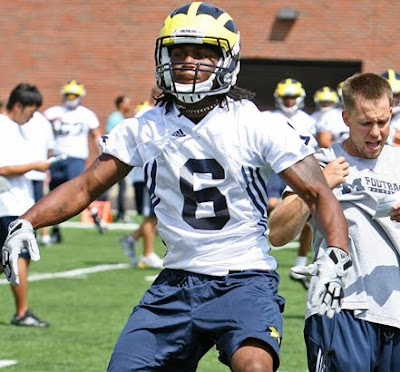 Stokes was a highly rated recruit coming out of Philadelphia in 2009, going on a somewhat meandering journey before signing with the Wolverines in February. He made two catches as a freshman and spent the last five weeks on the sideline due to injury. While wasting a redshirt year to make two catches might seem like a shame, it’s important to keep in mind that Michigan lost a couple seniors after the 2009 season (Greg Mathews, LaTerryal Savoy) and Stokes will be forced to play in 2010.

It was important for Stokes to get some reps against college-level competition in game situations, because other than presumed starters Darryl Stonum and Junior Hemingway on the outside, Stokes is all that stands between trotting out a freshman or three. Slot receivers Roy Roundtree and Martavious Odoms will also probably see time on the outside, but Stokes will need to spell some of the more experienced receivers. He has been compared to Mario Manningham as a receiver, and while Stokes hasn’t shown the knack for catching the deep ball that Manningham had, Stokes has shown the ability to work his way open and find windows when the quarterback scrambles. That’s a helpful trait, since Michigan’s quarterback’s are both about six feet tall and run frequently.