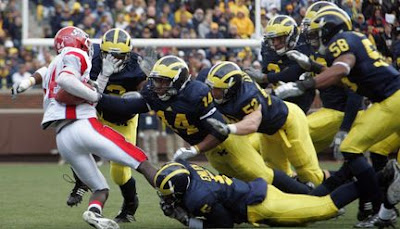 Last year I thought Jones would redshirt. He came to Michigan after being recruited as a running back or slot receiver, but with the shortage of cornerbacks, he immediately started getting reps on defense. He played cornerback against lesser opponents Eastern Michigan and Delaware State, and he contributed on kickoff coverage, making 7 total tackles. Ideally, he would have redshirted in 2009, but Jones played admirably in a tough situation.

Now he’s a sophomore and has changed positions once again. Jones moved to bandit in the spring, which is a strong safety-type position. He’ll be backing up probable starter Jordan Kovacs and competing with players such as Brandin Hawthorne, Vlad Emilien, and incoming freshman Marvin Robinson for playing time. I don’t expect that he’ll challenge for a starting position, but he’s an adequate backup and could move back to corner if any injuries occur. The best thing Jones has going for him is excellent speed, as he almost chased down Roy Roundtree during the spring game. He’s also a pretty tenacious hitter for such a small player.