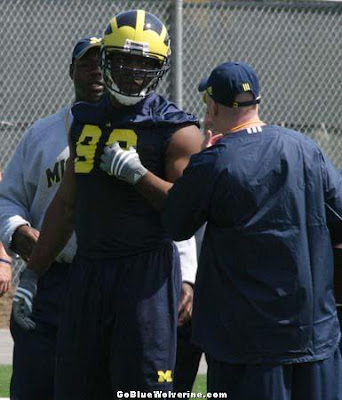 That #35 ranking seems just a bit overzealous in retrospect. Who am I kidding? That was probably the biggest miss of the entire countdown. Patterson was a highly recruited kid coming out of school (top 100, I swear!), but he hasn’t been able to translate that potential to college success. I didn’t pay a ton of attention to recruiting when Patterson came out of high school in 2006, but looking back at his high school highlights, those rankings had nothing to do with his football talents – they looked at his speed (4.64 in the forty) and size (6’3″, 256 lbs.) and just assumed he’d be a good football player. He had no technique whatsoever.

Last year I just had the crazy idea that a top-100 player at a position (defensive end) of zero depth could beat out a walk-on like Will Heininger. Heininger got a lot of run and made 10 tackles and half a sack. Patterson made one tackle. In three years, Patterson has produced 8 tackles, 1 sack, and 1 forced fumble. At least temporarily, Patterson has been bumped to nose tackle, but that might only have been because Mike Martin missed spring practice with an injury. At 272 lbs. and with the aforementioned lack of technique, I doubt Patterson is much of a threat to play at nose tackle, although the coaches did praise his quickness. With Ryan Van Bergen moving to defensive end and Anthony Lalota coming off his redshirt, those two will likely hold down the fort at end. Patterson looks to be a man caught in No Man’s Land. Hopefully he can contribute more in 2010 and his versatility is a positive, but he’s no better than third string at either position.