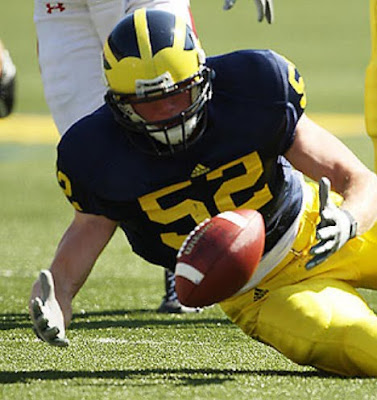 As many people probably did, I underestimated Leach’s role on Michigan’s defense last year. He had earned some hype as a redshirt freshman and finally got a chance to show off his skills as a redshirt sophomore. Due to some poor linebacker play from the starters – and a then-undisclosed back injury to Obi Ezeh – Leach beat out guys like J.B. Fitzgerald and Kenny Demens for playing time, despite the fact that Leach was about 206 lbs. and a former walk-on. He finished the season with 46 tackles, which is an impressive number for such an undersized kid.

By this past spring, Leach’s weight had been whittled to 200 lbs. and he was a backup Spur, which is like a strong safety. I question why the coaches didn’t try to bulk him up and keep him at weakside linebacker. He doesn’t have a frame to carry 240 lbs., but he could have probably added enough meat to get up in the 220 lb. range. Leach doesn’t seem to have the speed or athleticism to cover too many guys in open space. He earned his playing time in 2009 by being fundamentally sound, not by being a superior athlete. Regardless of whether he plays Spur, weakside linebacker, or middle linebacker, 2009 was probably the zenith of his football career. He could be a solid backup in 2010, but unless there are significant injuries, I don’t think he’ll be making 46 tackles again.