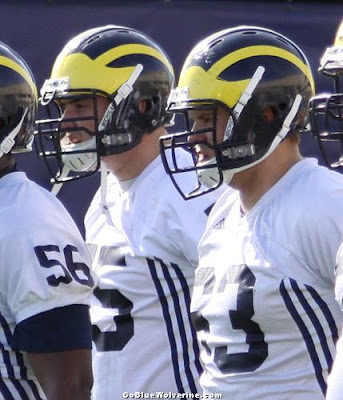 Schofield is a behemoth of an offensive lineman, and reports from his freshman year have been positive. In the spring he was fighting hard for the offensive tackle spot vacated by Mark Ortmann, and his athleticism has been mentioned by several people as something to watch. He seems to be fitting into Michigan’s zone blocking system very well.

Schofield came into Michigan as a likely right tackle prospect, and that’s still his apparent destination. Two part-time offensive tackle starters return in Perry Dorrestein and Mark Huyge, although neither one seems a good fit at Ortmann’s left tackle position. Dorrestein missed practices in the spring due to back issues, and if those problems persist, expect one of the redshirt freshmen – Taylor Lewan or Schofield – to step into the lineup and protect the blind side. Both were too light last season (Lewan was 281, Schofield was 275) to play, but after a year in the program, they’ve added significant weight and strength. For the third year in a row, I expect these offensive tackle positions to be a battle throughout the season.