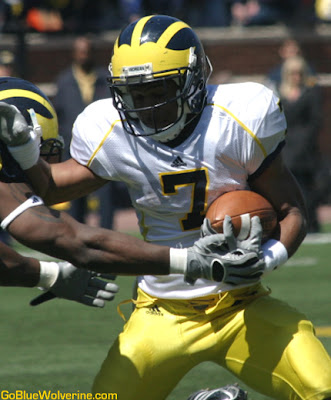 Name: Terrence Robinson
Height: 5’9″
Weight: 173
High school: Oak High School in Klein, TX
Position: Slot receiver
Class: Redshirt sophomore
Jersey number: #8
Last year: I rated Robinson #30 and figured he would get an opportunity as a punt returner or kick returner. He finished the season with 1 catch for 13 yards and 1 punt return for 11 yards.

Robinson is a tantalizing athlete out of Texas, someone whose skill has outpaced his production so far. He suffered a knee injury in 2008, which forced him to redshirt. Then he reportedly had problems catching the ball in 2009, which prevented him from contributing as much as many (including me) expected. But he was a high school quarterback and running back, so I should have expected the adjustment to take a little bit longer.

But reports from this spring indicate that his hands have been better, so Terrence could contribute a little bit more at receiver or returner. His talent probably deserves a ranking above #57, but the depth at slot receiver means that a good season from him isn’t necessary for the team to succeed. Any positive contributions from Terrence will hopefully be icing on the cake, because these slot receivers are going to be dynamite in 2010.