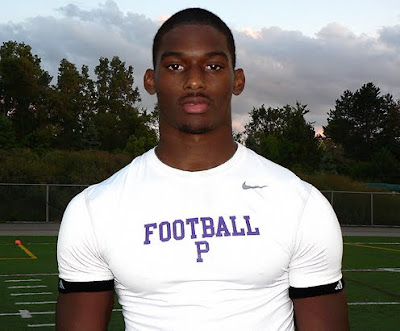 Early in the recruiting process, Michigan fans were hyped up about Ricardo Miller. Originally from Orlando, he and his family decided to move to Michigan so he could enroll early at Michigan. So he played ball this past season at Pioneer High School, in the shadow of Michigan Stadium. Not only was Miller seemingly a highly rated wide receiver, but he was clearly 100% committed to the Wolverines and exercised that enthusiasm by pushing hard for other kids to commit.

So as much as I like the kid’s character, it pains me to say this – but I don’t see the vast amount of potential that many other Michigan fans do. Some have already been clamoring for him to be given the #1 jersey, which is reserved only for the most special receivers at U of M. Miller doesn’t seem to have great speed or leaping ability, and he had some problems with dropping passes at Pioneer. In my opinion, the best thing Miller has to offer at this point is his size and blocking ability – at 6’4″ and 212 lbs., he should be able to dominate opposing cornerbacks in the running game. That might be enough to get him on the field in the fall, especially because outside wide receivers are in short supply on this team.