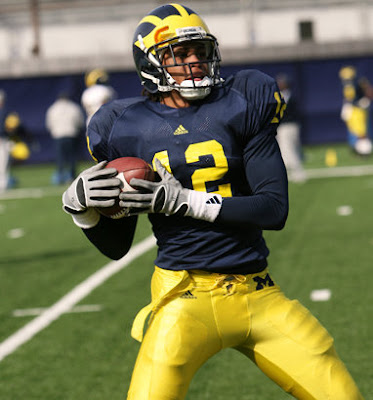 Floyd was a safety in high school and came to Michigan as a safety/cornerback combo player. I really thought Floyd would/should end up at safety and that his spot as a backup cornerback was simply a result of the lack of depth at the position. I’m still not entirely convinced that I was wrong. Floyd was forced into action last season when Boubacar Cissoko went a little haywire. It’s very telling to me that the coaches moved Troy Woolfolk from strong safety to cornerback and took Floyd off the field. Why? Because moving Woolfolk to cornerback meant that the coaches would rather have Jordan Kovacs and/or Mike Williams – both of whom were severely overmatched – playing deep safety than have Floyd on the field at cornerback. That’s scary to me.

Here it is 2010, and Floyd has made the jump all the way to the #7 most important player on the team. Why? Well, due to the Great Migration of cornerbacks, Michigan has lost four of its top cornerbacks over the last ten months. Freshman Demar Dorsey didn’t qualify, redshirt freshman J.T. Turner decided to transfer, senior Troy Woolfolk broke his ankle, and would-be junior Boubacar Cissoko is sitting in a jail cell for various ridiculous crimes. It is essential that Floyd has a good season in 2010. Other options at cornerback are a solid true freshman (Cullen Christian); a senior cornerback-turned-receiver-turned-cornerback benchwarmer (James Rogers); a sophomore running back-turned-cornerback-turned-safety-turned-cornerback (Teric Jones); and two true freshman midgets (Courtney Avery, Terrence Talbott). I am not expecting a huge turnaround from J.T. Floyd. I think he’s limited physically, but if he can play fundamentally sound football, tackle consistently, and not allow receivers to race past him on the regular, then he’ll have done a decent job.

Ryan Van Bergen was the leading vote earner with 40%. Floyd was second with 33%.