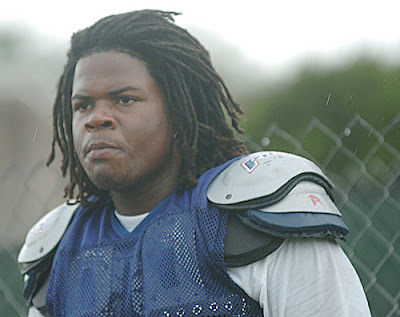 Ash is a big kid from south Florida pipeline Pahokee, the same school that provided Michigan with Martavious Odoms, Brandin Hawthorne, and Vincent Smith. That 263 pounds thing up there might be a lie. A State of Florida insider said around signing day that Ash was up around 300 lbs. at the time. If Ash maintains that weight, he’ll likely be a nose tackle. If he can work himself closer to that 263, then he could have more flexibility to play 3-tech defensive tackle as well.

Ash’s conditioning will be sorted out by Mike Barwis and Co., and I imagine that Ash’s playing weight will be below 300. Observers from Florida also indicated that Ash played better when he was around 240 lbs., so I get the feeling that he’s not someone who wears weight well. Regardless, Ash is probably headed for a redshirt this year to get his conditioning sorted out. I placed him somewhat higher on this list than I wanted to, but that’s largely because depth on the interior defensive line is somewhat thin. The Wolverines have a solid four interior linemen (Mike Martin, Greg Banks, Renaldo Sagesse, William Campbell), but any injuries might disrupt that depth and force a freshman to play. Furthermore, both Banks and Sagesse won’t be returning in 2011, so there may be a need to get a young guy some garbage time reps this season.