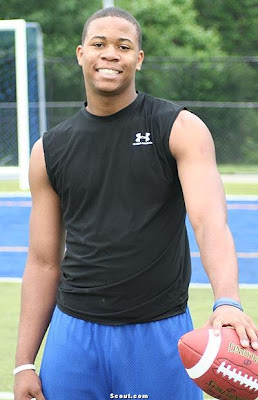 Wilkins is a big-time defensive end recruit out of Pennsylvania. He probably would have been more hyped by Michigan fans, but he committed last June, so the excitement wore off. I can’t find the article now, but I remember reading comments from Wilkins’s high school coach about the youngster’s work ethic – his strength, his lack of body fat, etc. It sounds like Michigan got a kid who will fit in well with the strength and conditioning staff.

Since he’s already 244 lbs., I assume Wilkins will bulk up to play the strongside defensive end position. He needs to add about 20 lbs. to be a viable option on the defensive line, which might take him a couple years to put on. Normally I would rank his likelihood of playing early lower than a heavier guy like Jibreel Black, but Wilkins has some position flexibility. There’s a small possibility that he could play Craig Roh’s Quick position, whereas Black is strictly an end. I still think Wilkins will redshirt, but he has some versatility and could earn some early playing time if there’s an injury.