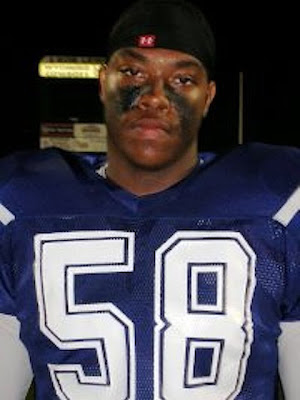 With as much certainty as an outside observer can have, I believe the players listed below Black will redshirt. That includes Christian Pace, Davion Rogers, DJ Williamson, Conelius Jones, Jordan Paskorz, Jake Ryan, Ray Vinopal, Drew Dileo, and Austin White. Their positions and readiness make that a near certainty, in my opinion.

But now we get into the murkier depths of the roster, the guys who have an outside chance to play this season due to a starter or rotation player getting injured, or perhaps due to the coaches wanting to get a guy some reps in preparation for 2011. That’s where Jibreel Black fits. Ideally, he’d probably redshirt in 2010, giving him a chance to add some weight and get stronger. He’s shorter than a prototypical defensive end at only 6’2″, so he’s going to need to make up for that deficiency in the strength department. But I’ve already compared him to Brandon Graham, so I think the kid’s got some talent.

The starter at defensive end will likely be Ryan Van Bergen, who has proven to be pretty durable so far in his career. He’s also pretty good. His rotational backup might be Anthony Lalota, but if Van Bergen does suffer an injury, I’d expect Greg Banks to flip to 5-tech DE with Renaldo Sagesse moving in at Banks’s old spot. That’s a big, fancy way of saying that I hope Van Bergen doesn’t get injured.

Meanwhile, Black is probably the most college-ready DE in the class, and he’s got a chance to contribute. With Banks and Sagesse departing after this season, the coaches might want to season a younger guy with some reps against UMass or Bowling Green. Ultimately, I don’t think Michigan will need Black on the field this season, but I wouldn’t be surprised to see him playing in non-critical moments.