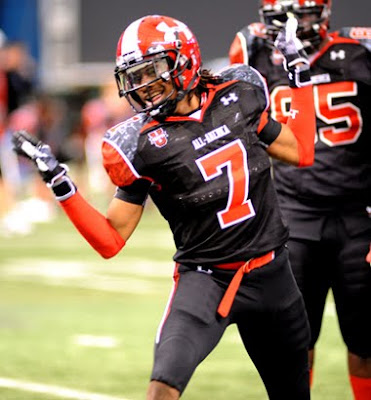 Demar Dorsey: good football player, questionable dancer
Michigan picked up four commitments in 2010 from players who will likely end up at cornerback. Cornerback was a glaring need in the 2010 class, considering that the Wolverines enter this coming season with only three scholarship cornerbacks (Justin Turner, JT Floyd, Troy Woolfolk) on the roster, one of whom (Woolfolk) might play safety like he did in early 2009. These four cornerbacks might not immediately fix the defensive backfield, but they’ll at least fill up the depth chart and offer some competition.

The first player to commit was Courtney Avery from Lexington, OH. Avery played quarterback – and played it well – as a high schooler, and if he were any taller than 5’10”, he might have been worthy of some scholarship offers as a signal caller. Avery had been committed to Jim Harbaugh’s Stanford Cardinal prior to pledging for Michigan, but impressed enough at Michigan’s summer camp to garner an offer. Shortly afterward, he became a Wolverine. Avery has some shortcomings as a defensive back. He is an aggressive tackler, but he’s small-ish and might lack ideal speed for man coverage. I think he’d be better off as a corner in a largely zone scheme, but he’s the type of kid who could be a solid backup and perhaps contribute as a gunner on the punt team.

Following Avery, Terrence Talbott from Huber Heights, OH, committed to the Wolverines in mid-August. (His brother, Terry, is a DT commit in this class.) Talbott is a little sturdier than Avery at 172 lbs., and he’s a bit smoother of an athlete. Talbott has good speed and excellent leaping ability. He’s also a solid tackler and potentially a player who could see some time on special teams. I like him a little more than Avery, and I also think Talbott has better man coverage abilities.

Longtime Michigan lean Cullen Christian finally committed to play in Ann Arbor around Thanksgiving 2009. At the time, Christian was the highest rated defensive back and desperately needed in the wake of Boubacar Cissoko’s departure from the team. Christian is a bigger cornerback at 6′ and 180 lbs. He has the ability play deep safety but has insisted that he wants to play cornerback, and that’s where I think he’ll stay. I have some questions about his speed, but his technique is sound; he’s a decent tackler but needs to improve in that area.

Demar Dorsey was the last cornerback to commit to Michigan, waiting until National Signing Day. Michigan fought hard to steal him from the likes of Florida and USC. He was an Under Armour All American and while he’s rough around the edges, he has swagger and speed to burn. I think he’ll be a free safety eventually, although Michigan’s most immediate need is at cornerback, which is where he’ll begin his career. Dorsey has had some off-the-field issues as a youth, but if he can keep those behaviors behind him, the sky is the limit.

Predictions: Courtney Avery will almost surely redshirt in 2010; I think he’ll be a decent backup and special teams player throughout his career. Terrence Talbott will likely join his brother and Avery in the redshirt brigade (no relation to the band, by the way), but I think he has a chance to be a one- or two-year starter late in his career. Christian will play in 2010, whether he starts or not; he reminds me of Donovan Warren in some ways. Dorsey is the most likely to play this coming season; like Denard Robinson, he’s just too talented to keep off the field. Whether he’s returning kicks with Darryl Stonum, starting at corner, or the backup deep safety, his speed and athleticism can’t spend a year on the bench.

Grade: A. Rodriguez and Co. did as well as anyone would have expected. I was underwhelmed early on when Avery and Talbott were the only ones onboard and Cullen Christian kept postponing what many thought would be an early commitment, but it all worked out in the end. In two or three years, Michigan’s secondary is going to be crawling with speedy, hard-hitting athletes.