March 3, 2010
Uncategorized
no comments
admin
Two slot receivers joined the class of 2010, both of whom committed early in the process. 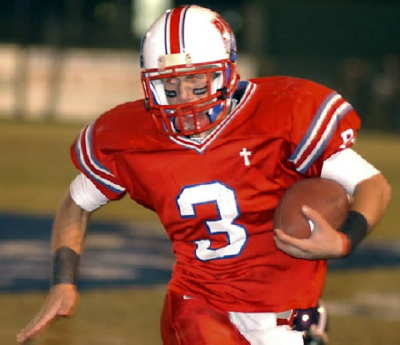 The first is Drew Dileo, a 5’10”, 175 lb. player from Greenwell Springs, LA. Despite not having overwhelmingly impressive offers, Dileo can fill a role at Michigan – punt returner. Since Steve Breaston left after the 2006 season, Michigan has suffered from poor to mediocre punt returning. The role was assumed by guys like Donovan Warren (who took a lot of chances), Greg Mathews (sure-handed but slow), Martavious Odoms (whose butterfingers only show on punt/kick returns), and Junior Hemingway (again, slow). Dileo can play slot receiver, but his earliest chance to contribute will probably be on special teams. 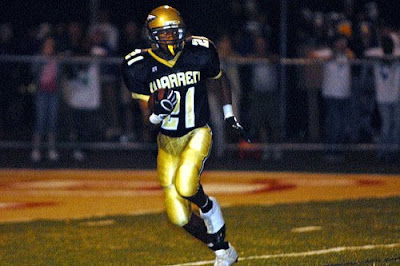 It’s a good thing this photographer had a high-speed shutter.The second commitment at slot receiver comes from D.J. Williamson, from Warren, OH. Williamson is listed at 6’1″ and 172 lbs., meaning he’s thin and willowy. He has state championship track speed, but unfortunately, that speed hasn’t necessarily shown itself on the football field. Since his commitment, he struggled through a senior season in which he was injured and his quarterback play was subpar. He could play out wide or in the slot, but said on National Signing Day that he’ll start off inside.

Predictions: Dileo reminds me of New England Patriots receiver . . . Troy Brown. He’ll probably redshirt in 2010, as guys like Odoms and Jeremy Gallon could handle the punt returning duties. But at some point in his career, we’ll likely see Dileo deployed as a sure-handed, occasionally exciting returner. Williamson as a slot receiver intrigues me. When he appeared to be an outside receiver in the making, I thought he would get outmuscled and I’m not impressed with his route running. He has reportedly suffered from the dropsies at times, but if he can get that problem worked out, Williamson could be a speedy Roy Roundtree in the slot working against slower linebackers and safeties. As it is, I don’t see him contributing for a couple years.

Grade: B. Neither player is an immediate-impact sort, but they don’t need to be with guys like Martavious Odoms, Jeremy Gallon, Terrence Robinson, and Roy Roundtree ahead of them (in addition to Teric Jones and Kelvin Grady, who could play slot). Dileo fills a hole, and Williamson has the speed to make a few big plays before all is said and done. Ultimately, this is a position/class where Rodriguez could afford to “miss” with a player or two and not suffer greatly in the future.