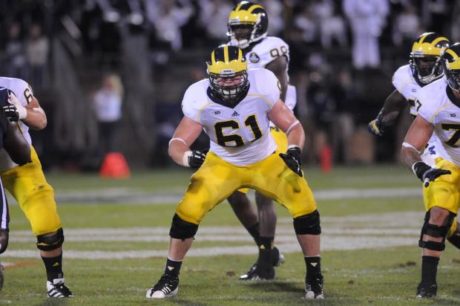 Going into the 2013 season, nobody really knew what to expect from Glasgow. He was a highly regarded walk-on – for whatever that’s worth – but he really struggled to pull in his early spring game appearances, which caused me to question his ability to play that position for a team that wanted to “power” the ball down the field. He began the year as a left guard, and despite some difficulties, he eventually became a solid player. Along with Taylor Lewan, the left side was the strongest side of the line. When center Jack Miller had problems holding the point of attack, the coaches bumped Glasgow to center, benched Miller, and played musical chairs with the left guard position. The move was frustrating to watch, because Glasgow botched at least one exchange per week for his first four games at center; prior centers Elliott Mealer and Miller had zero memorable exchange issues during 2012 or the first few games of 2013. However, Glasgow ironed out his problems by the last third of the season and turned into a solid player.

Observers and coaches seem to agree that Glasgow is Michigan’s best lineman going into 2014. He has experience at center and guard, and he also has the ability to play tackle. When I saw him play in high school, I thought he looked like a natural right tackle. Unfortunately, due to a DUI incident this offseason, he will be watching this Saturday’s game against Appalachian State. He does not appear on the depth chart, so it’s not clear where the coaches see him fitting once he returns from suspension. The possibilities are numerous with his ability to play several positions, but he will almost certainly be a starter from week two onward. Michigan has a true freshman left tackle, a once-benched redshirt junior center, a questionable trio of guys fighting for right guard, and a first-time starter at right tackle; realistically, any of those players could be sidelined in favor of Glasgow, but my guess is that he will play right guard, at least until Kyle Kalis returns to full strength after having back issues for much of August.