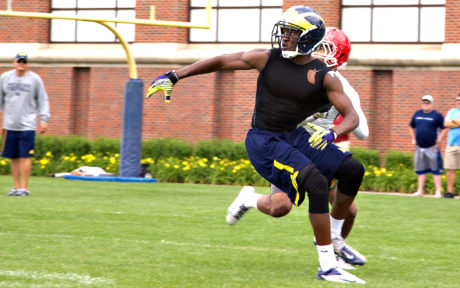 Ways had a bit of an underwhelming offer list when he committed to Michigan last April (Iowa, Pitt, Rutgers, some MAC schools), but for the life of me, I can’t figure out why he wouldn’t be a 4-star recruit to the recruiting services. Ways struggled with catching the ball early in his high school career, but that issue improved as he gave up basketball and concentrated on football. A tall guy with good leaping ability and speed makes for a huge catch radius. Either way, he enters a phase of his career where star ratings don’t matter anymore.

Ways is perhaps more physically ready to play as a freshman than the other two wide receivers in his class, but Freddy Canteen had the spring to get ready and brings an element of speed that is somewhat lacking in the experienced players. Whether Ways plays or not depends largely upon how deep the coaching staff wants to go with the receivers. At least one receiver seems to play each year with no discernible benefit (Junior Hemingway, Toney Clemons, Drew Dileo, Jeremy Jackson, Da’Mario Jones, Csont’e York, etc.), and Ways could be that guy in 2014. Canteen appears to have a definite role on the team, but the Wolverines replace three senior wide receivers from last year (Jackson, Dileo, Jeremy Gallon). The return of redshirt sophomore Amara Darboh from his foot injury fills one more spot, so Ways will find himself in a battle with the likes of York, Jones, and Jaron Dukes for scraps of playing time. It would make sense to redshirt him, but the most logical thing doesn’t always happen.