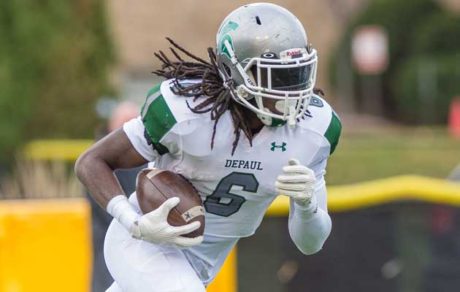 Hit the jump for the rundown on Michigan’s 2016 recruiting efforts at the running back position.

Commits: Davis was the first back in the class to commit to Michigan. He’s a big bruiser of a back who was listed at 6’1″ and 225-230 lbs., but he showed up at a camp last summer weighing 242 lbs. A productive high school back who was the focal point of his team’s offense, his weight will be something to watch. Some recruiting services ranked him as the #1 fullback in the class, but he is insistent on playing tailback. The next back to commit was Evans, a 5’11”, 186 lb. speedster who could end up playing slot receiver or even cornerback. He might be the quickest back on the roster initially, and it sounds like that’s the position he will play to begin his career, but a position switch could be forthcoming if the coaches are satisfied with the other options. The final addition to the roster was Walker, who committed to the Wolverines in December and enrolled in January. The 6’1″, 210 lb. Walker was committed to Ohio State for most of 2015, but decommitted from the Buckeyes late in the year. He is a combination of the other two and a good all-around back. At one point he was the #1 back in the country before a late tumble dropped him to the #4 spot as his position. Some analysts think Walker peaked in his sophomore/junior years of high school before plateauing as a senior. He was an Under Armour All-American who got some criticism for looking tentative at times, but he does have a good mix of size, speed, power, blocking, and catching abilities.

Biggest miss: Miles Sanders is the best back that Michigan offered in the 2016 class, in my opinion, but the Wolverines had a good shot at Atlanta (GA) Woodward Academy’s Elijah Holyfield during Brady Hoke’s tenure. The 5’10”, 204 lb. back – the son of former heavyweight champ Evander Holyfield – had Michigan as his top school, or at least one of his top two, when Hoke was the coach, but the new staff did not pursue him much at all. Holyfield is a downhill back with decent speed and would have fit in nicely with Harbaugh’s offense.

Decommits (2): Southfield (MI) Southfield’s Matt Falcon committed to the Wolverines last spring, and I was excited about the abilities that he would bring to Michigan. He was fast and powerful, a combination Michigan hasn’t seen much of in recent years. Unfortunately, he suffered an ACL injury before his senior season even started. Not only that, but it was his third career ACL injury. Some stories leaking out have said that Michigan encouraged him not to play his senior year, and instead enroll early at Michigan in January, where the top-flight trainers would be in charge of strengthening his legs to avoid such injuries. After the injury, Michigan offered him a medical scholarship that would not have allowed him to play football. Instead, Falcon opted to take a scholarship to play in the MAC at Western Michigan. Winchester (IN) Winchester athlete Kiante Enis committed to Michigan in June 2015 after receiving an offer at a Summer Swarm Tour camp. After that point he reported not hearing much from the coaching staff, despite having a productive senior year. He officially decommitted in January and signed with Indiana on National Signing Day.

Grade: B+. I think Michigan did a good – not great – job of getting a variety of potential running backs in this class. They got a power back (Davis), a speedster (Evans), and an all-around back (Walker).There’s also a chance that McKeesport (PA) McKeesport safety Khaleke Hudson could end up playing running back, although I’ll address him more fully with the defensive back group. Coach Harbaugh astutely shed some potential dead weight from the recruiting class. While I really like Falcon’s potential, his three ACL injuries before his senior year suggests some serious health concerns; he might even be my ranked above Walker as my top-rated running back in this class if not for the injury. And I did not view Enis as a future contributor as a running back; even mediocre Indiana is saying he’ll get a chance to play running back because that’s what he wants to play, but they’ll consider moving him to receiver, cornerback, or safety. At least one of the guys who did end up signing with Michigan should be able to develop into a quality player, and two of them have the physical skill set to change positions if necessary.