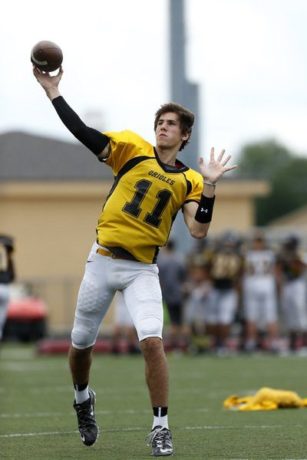 QUARTERBACKS (1): Brandon Peters – Avon (IN) Avon
Commits: Peters is a 6’4″, 209 lb. prospect who was hand-picked Jim Harbaugh. He’s a 247 Composite 4-star, the #6 pro-style QB, and #61 overall. He participated in last year’s Elite 11 competition, and he was a U.S. Army All-American. Peters had a very good season for Avon, but he struggled at the Elite 11 and in the U.S. Army bowl. One explanation for his struggles is that he did not have a personal quarterback coach in high school, something a lot of high school QBs have these days. Still, he struggled at times with his mechanics and he does not go through his progressions as quickly as one might hope. He has good physical tools, but he is not college-ready at this point.

Biggest miss: K.J. Costello – Rancho Santa Margarita (CA) Catholic. Costello was reportedly close to committing to Michigan during the summer of 2014 when he visited during Brady Hoke’s tenure. Instead, Hoke took a commitment from Trotwood (OH) Trotwood-Madison’s Messiah DeWeaver, someone whom Jim Harbaugh parted ways with shortly after being hired. Costello – a teammate of Michigan wide receiver signee Dylan Crawford – would go on to sign with Stanford, while DeWeaver signed with Michigan State. Costello outperformed Peters at the Elite 11 and at the Army bowl.

Decommits: Messiah DeWeaver was the first QB to decommit. Then when Michigan set up its Summer Swarm Tour and ended up in California, the coaching staff happened upon Norco (CA) Norco athlete Victor Viramontes, a quarterback/linebacker. They offered him and he committed to Michigan shortly thereafter, without ever having seen campus. He would visit in the fall, but he decommitted in December, reportedly because someone had planted in his head that he would not get a chance to play QB for Michigan. While Viramontes has the size and athleticism to play H-back, linebacker, or maybe strong safety in college, he wants to be a quarterback. He was rumored to be silently committed to Michigan leading up to National Signing Day, but Michigan did not have enough room in the recruiting class and did not send him a National Letter of Intent to sign; he picked the Cal Bears.

Grade: A-. I think there were better options at quarterback than Peters, but Harbaugh seems to like Peters, so I can accept that based on Harbaugh’s track record. Historically, Harbaugh seems to like to bring in two quarterbacks per class (one true QB and one more athletic QB), so losing Viramontes was a bit of a blow. I didn’t foresee Viramontes winning the job full-time, but he could have been a guy who could play QB in certain packages or someone who could have helped out at a few other positions.