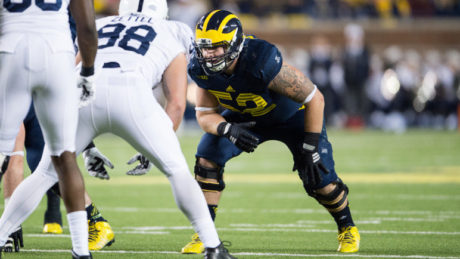 Cole has been eligible to play in 25 Michigan games over his two seasons, and he started every one at left tackle. He was a lightweight as a freshman in 2014, but he held his own. He was a little heavier in 2015, and he was good enough to be Honorable Mention All-Big Ten. His best quality was his ability to block on the edge and in space, but he was occasionally overpowered by bigger, stronger guys since Cole was only about 287 lbs. Still he was a solid player, and the offensive coaching staff favored the left side in crunch time. Combined with mammoth left guard Ben Braden and center Graham Glasgow, the left side got the job done pretty well.

With Glasgow graduated and playing for the Detroit Lions, Michigan needed a new center and moved Cole there in the off-season. They gave him a taste of center in the spring of 2015 in anticipation of Glasgow’s departure, so this isn’t brand new. There were some issues with shotgun snaps in the spring game, and it’s always a concern when a player moves to center because they have to get acclimated to calling protections, snapping under pressure, etc. Cole is arguably Michigan’s best blocker, and he’s the most suited to center because of his quickness. He was always unlikely to stick at left tackle because he lacks prototypical bulk and length, so center and guard seem more fitting. His primary backup is redshirt junior Patrick Kugler, who has looked overmatched in limited time. If Cole were to get hurt, it would create a void in the middle that would be difficult to overcome. Cole has a chance to be an all-conference player and set himself up as an NFL draft pick for 2018.