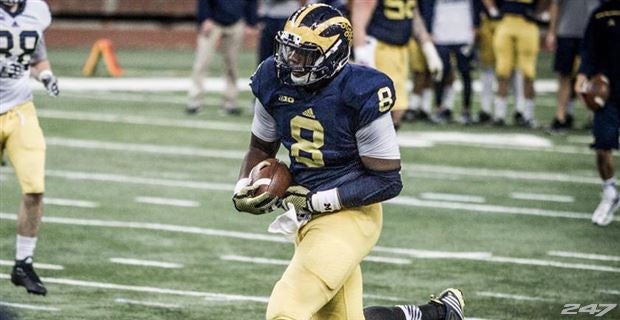 Please feel free to check out and participate on the message board (LINK).

I had the notion last season that Wheatley would play last season as a backup or complement to A.J. Williams, who had struggled for his first three seasons on campus. I should have known better about Williams, because Jim Harbaugh and his staff know how to coach tight ends. Williams improved as both a blocker and receiver, and Wheatley was able to redshirt. That may have been a good thing, because he was a little too bulked up last season (286 lbs.) and used the time to chisel himself into better shape.

This spring the most impressive play we saw from Wheatley was a long catch-and-run at Ford Field where he stabbed a pass one-handed against good coverage from Devin Bush, Jr. That showed his soft hands and ability to run. He also held his own as a blocker against some very good defensive linemen for Michigan. With All-American Jake Butt at tight end, Wheatley may not break out this season to be a star. But I do expect him to start in double-tight sets, and he should be a better receiver than Williams ever was. This appears to be the beginning of the Tight End Revolution in Ann Arbor.