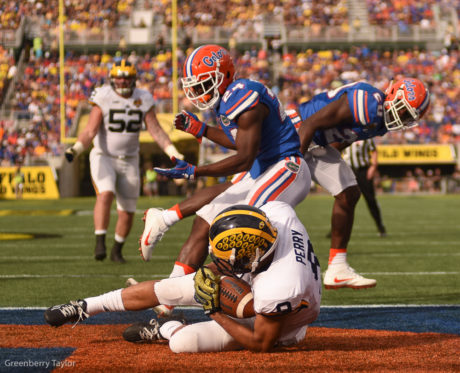 From purely a numbers standpoint, I probably underrated Perry last year when I ranked him at #70. I predicted he would play and potentially be a possession guy, but he saw the field more than a lot of people expected, including me. However, he struggled early, as one would expect of a freshman. Thrown out there in the opener against a rabid Utah defense, Perry ran a couple routes incorrectly and ended up causing Jake Rudock to throw 2 interceptions (a third Rudock INT wasn’t Perry’s fault). It was an inauspicious debut, but the fact that he was on the field – and skipped over some older players – indicated how much the coaches believed in him. He saw a slight reduction of playing time until he got a better grasp on the offense, and he ended up fifth on the team in receptions. He capped the season with a Florida game that saw him make 5 catches for 51 yards and his first career touchdown.

Perry’s yards per catch were slightly lower than lumbering tight end A.J. Williams’ and slightly higher than lumbering running back De’Veon Smith’s, so the big-play ability is still a question mark. I maintain that he’s a possession slot guy rather than a dynamic slot guy, but you need both types of players. Perry’s playing time may not increase significantly this year, even with a year under his belt. The top two receivers return, and a handful of talented tight ends are itching to take over the spot left by Williams. On top of that, Michigan recruited several potential early-impact guys, including Kekoa Crawford, who is bigger, faster, and stronger than Perry. The coaching staff may not want to go through the same growing pains they had with Perry last year by sending out freshmen early in the year, and Perry’s time in the system will be to his advantage. His value lies in his reliability, though there are other guys with higher ceilings.