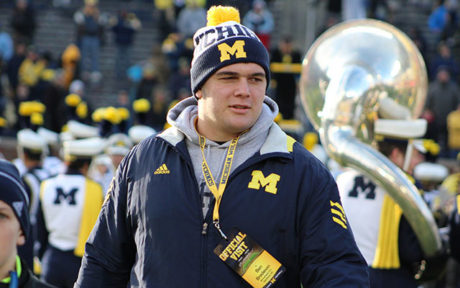 Bredeson eventually surprised a lot of people. Most big-time offensive linemen in the state of Wisconsin go to Wisconsin because, well, the Badgers have done an excellent job of producing hogs over the years. It wouldn’t be a bad choice at all. But he ended up looking more at Michigan and Notre Dame, eventually choosing the Wolverines in June of 2015. By the end of his senior year, he was a USA Today All-American, an Under Armour All-American, and a Maxpreps First Team All-American. He also won Gatorade Player of the Year in Wiconsin.

Michigan has had a three-year run of playing a true freshman offensive lineman. Last year it was Grant Newsome, before that it was Mason Cole, and in 2013 it was Kyle Bosch. Bredeson seems the most likely to carry on that tradition. The coaching staff said they wanted him to start off his career at offensive guard. He won’t pass Ben Braden or Kyle Kalis to start this year, but he could press for playing time behind them. The next guard has been David Dawson, but Dawson has struggled and had an upper body injury this spring that caused him to miss some time. Jim Harbaugh likes to use an extra lineman or two in certain personnel packages, so it wouldn’t surprise me if Bredeson is one of those guys this season. He’s the most polished incoming lineman, and the staff could be grooming him for a starting job in 2017 when there will be at least three new starters on the line.