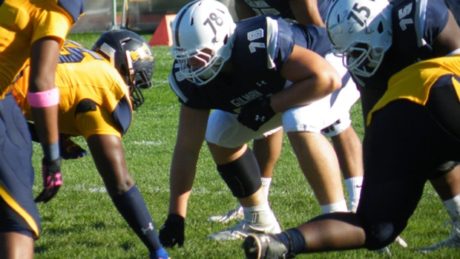 Spanellis was offered by Brady Hoke in Hoke’s final fall in Ann Arbor, but then communication fell off between Michigan and Spanellis after the coaching transition. In the meantime, Spanellis committed to Virginia and seemed pretty solid for a long time. But then Jim Harbaugh came calling in January, and things progressed fairly quickly. He visited and committed a couple weeks before National Signing Day.

I have Spanellis listed above as an offensive tackle because that’s the position he played in high school, but he will probably be an offensive guard in college. Either way, Michigan has a decent top three at tackle and top four at offensive guard, or at least decent enough to allow Spanellis to redshirt. Nolan Ulizio looked solid at right tackle in the spring, and Jon Runyan, Jr. held his own at guard, joining David Dawson, Ben Braden, and Kyle Kalis as viable offensive guards. Most linemen redshirt, and Spanellis probably won’t be an exception.