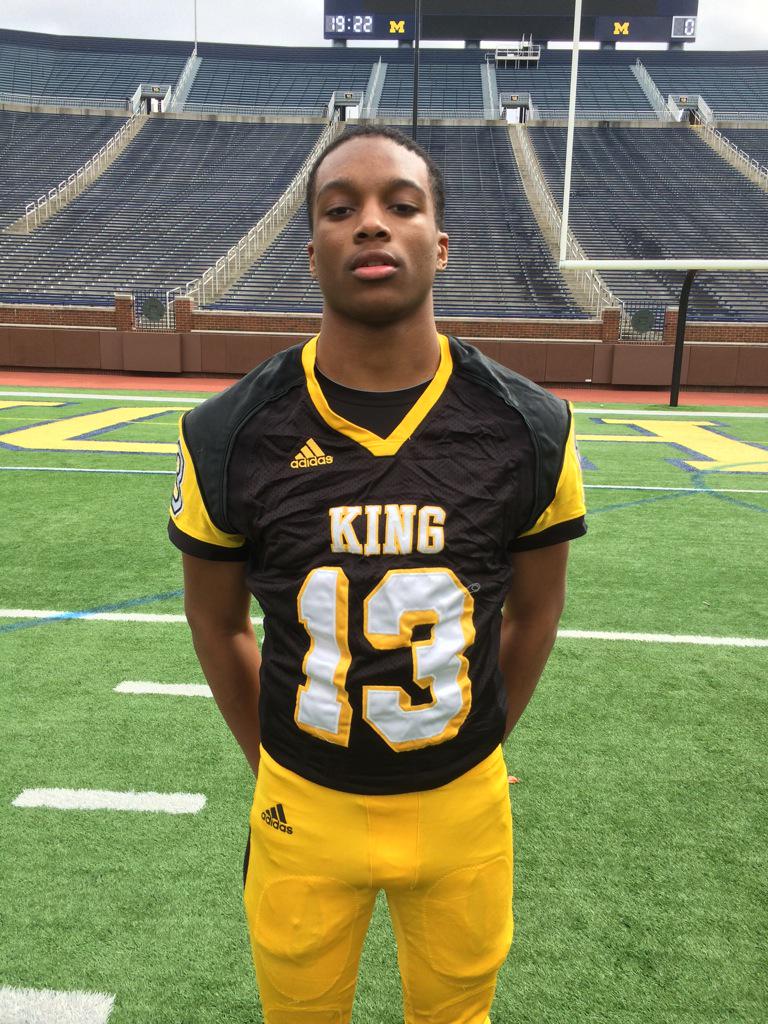 Thanks to Karl for the generous donation yesterday! If you would also like to donate to the site redesign drive, please use Paypal (on the left sidebar) or do some shopping on Amazon (LINK). Danke sehr!
—————


ADDED TO THE BOARD: 2017
Olney (MD) Good Counsel linebacker Jordan Anthony was offered by Michigan. He’s a 6’0″, 210 lb. prospect with offers from Clemson, Iowa, Kentucky, and Maryland. He’s a 247 Sports 4-star, the #9 outside linebacker, and #110 overall. Anthony is a speedy linebacker who would probably be a weakside linebacker in college. Good Counsel is the alma mater of Michigan fifth year senior cornerback Blake Countess.

Los Angeles (CA) Hawkins wide receiver Taariq Johnson was offered by Michigan. He’s a 6’4″, 210 lb. prospect with offers from Baylor, Miami, and Ohio. He’s a 247 Sports 4-star, the #19 wide receiver, and #127 overall. Johnson is big enough to be a potential tight end. He’s a recent transfer from Long Beach (CA) Poly, and his highlights were removed from their Hudl page, so all I have to go on right now is a few highlights from a camp. Two of Johnson’s 2017 teammates include running back Greg Johnson and wide receiver Joseph Lewis, both of whom already hold offers from the Wolverines.

Hit the jump for several more new offers, a few guys who committed elsewhere, and some random bits.

Detroit (MI) Cass Tech safety Jaylen Kelly-Powell was offered by Michigan. He’s a 6’0″, 183 lb. prospect with offers from Northwestern, Pitt, and several MAC schools. He’s a 247 Sports 4-star, the #12 safety, and #180 overall. He claims a 4.49 forty. His film shows a solidly built safety who’s not afraid to come up and stop the run, although he is transitioning to cornerback for his junior season at Cass Tech. Kelly-Powell was named after his dad’s favorite Michigan basketball player, Jalen Rose, and grew up a Michigan fan.

Owings Mills (MD) McDonogh offensive tackle Jordan McNair was offered by Michigan. He’s a 6’5″, 285 lb. prospect with offers from Maryland, Ohio State, and Penn State. He’s a 247 Sports 4-star, the #21 offensive tackle, and #159 overall. McNair seems a little overrated to me, as he does not move particularly well for a tackle and does not consistently finish his blocks.

Paramus (NJ) Catholic linebacker Drew Singleton was offered by Michigan. He’s a 6’2″, 215 lb. prospect whose only other offer comes from Rutgers. He’s also a 247 Sports 4-star, the #11 outside linebacker, and #136 overall. Singleton is a little ponderous at the point of attack and does not seem like a fluid athlete, although he does have good straight-line speed. Not only does he hail from the alma mater of Jabrill Peppers and Juwann Bushell-Beatty, but Michigan has also offered 2016 defensive tackle Rashan Gary, 2016 wide receiver Donald Stewart, and 2017 defensive end Corey Bolds. The Paladins also feature a highly regarded 2018 quarterback, Allan Walters, who already holds a Rutgers offer. New Michigan recruiting coordinator Chris Partridge was the team’s head coach up until last season, too.

Detroit (MI) King cornerback Ambry Thomas was offered by Michigan. He’s listed at 5’11”, 165 lbs, but he does not look that tall or big in his film. He has offers from Cincinnati, Illinois, Iowa, and Pitt. He’s a 247 Sports 4-star, the #10 cornerback, and #144 overall. Although he is tiny, Thomas is quite possibly the fastest player in the state of Michigan for the class of 2017. He has not been in a great deal of contact with the Wolverines, so it’s unclear how serious both sides are, but Michigan needs an influx of speed, and Thomas has some. King has several top-notch prospects over the next couple classes, including an entire defensive backfield that could be playing FBS football in the next couple years – 2016 wide receiver/cornerback Donnie Corley, 2016 cornerback Lavert Hill (a Penn State commit), 2016 safety Jesse Johnson, and 2016 cornerback Dontre Boyd, not to mention Thomas and 2018 corner Jaeveyon Morton.

Snellville (GA) Brookwood tight end Leonard Warner was offered by Michigan. He’s a 6’4″, 209 lb. prospect with offers from Alabama, Auburn, Georgia, Ole Miss, and Tennessee, among others. He’s a 247 Sports 4-star, the #7 outside linebacker, and #101 overall. Warner plays a lot of different roles for his high school team – linebacker, fullback, tight end, wide receiver – and could feasibly play tight end or linebacker at the next level. He seems to enjoy the physical aspect of the game, as he’s a hard-nosed tackler and also lays some devastating trap blocks on defensive tackles from an H-back alignment. It will not be easy to pry him out of the south.

Cypress (TX) Cy-Fair tight end Brock Wright was offered by Michigan. He’s a 6’4″, 243 lb. prospect with offers from Baylor, Georgia, Notre Dame, Oklahoma, and Texas A&M, among others. He’s a 247 Sports 4-star, the #1 tight end, and #56 overall. He has an impressive combination of blocking and running skills with the speed to outrun defensive backs. As a junior in 2014, he caught 17 passes for 369 yards and 2 touchdowns. Michigan does not have a great shot at landing him, but Cy-Fair is the alma mater of the one and only Sam McGuffie, so the Wolverines have that going for them.

OFF THE BOARD
Antioch (CA) Antioch running back Najee Harris committed to Alabama. Harris is the #1 running back and #16 overall player according to 247’s ranking, and he was the first 2017 prospect that Jim Harbaugh’s staff offered.

Akron (OH) Hoban running back Todd Sibley, Jr. committed to Ohio State, and the hits kept coming for Michigan recruiting this weekend. The Wolverines have offered just five running backs in the 2017 class, and two of them went off the board this weekend. Sibley joins his quarterback – Danny Clark, who transferred in from Massillon (OH) Washington – as a Buckeyes commit. Michigan was probably Sibley’s #2 choice, but that doesn’t count for much.

Westerville (OH) South cornerback Marcus Williamson committed to Ohio State, too. The Buckeyes had a solid couple days of recruiting on their spring game weekend.