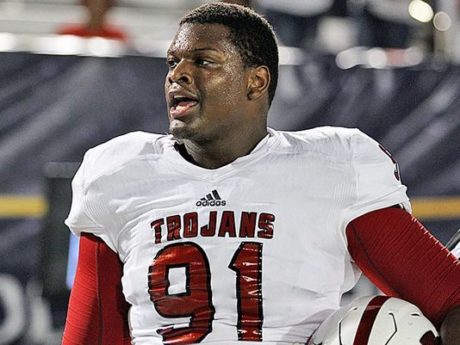 Solomon committed to Michigan in June of 2016 (LINK). And then he committed again in February of 2017 (LINK). Why did he have to commit to Michigan twice? Because in between, Michigan thanked him for attending the BBQ at the Big House that he didn’t attend, and they spelled his name wrong, which led to a decommitment (LINK). I can’t blame him for being miffed, but he was also recorded saying “f*** Michigan” by another player at the U.S. Army All-American Bowl. Hope seemed to dissipate at that point . . . until a couple days later, Michigan Crystal Balls started to pop up. The rest is history, and Michigan landed a 5-star and the #24 overall player in the country.

Solomon arrived on campus this summer, and initial reports were not glowing. He was rumored to be less physical than expected, despite the fact that he has to realize there’s an opportunity for immediate playing time behind nose tackle Bryan Mone. But here’s him defeating sophomore offensive guard Ben Bredeson:

If he’s not quite powerful enough to be a standout as a freshman, he doesn’t seem too far off.

The Wolverines need a nose tackle to step up this year, now that Maurice Hurst, Jr. has moved to the 3-tech position and Ryan Glasgow is in the NFL. Sophomore Michael Dwumfour can play some nose, too, but it’s a position that’s pretty light beyond Mone unless guys start shifting around. I’ve said for a while that I think Solomon will be the #2 nose tackle, and while it might take him a bit of time to adjust, I think he has to fill that role this season. I think he will be pretty good by the second half of the year, if not earlier.