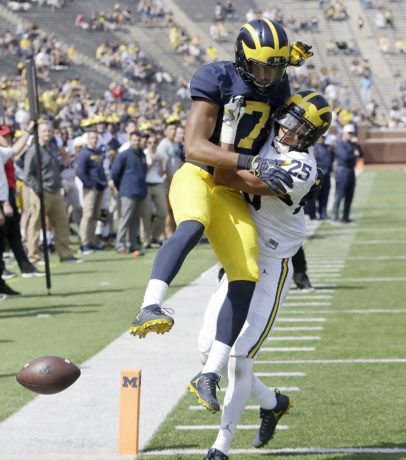 Black was a big recruiting win for Michigan out of Connecticut. In the final composite rankings, he was the #17 wide receiver and #118 overall. The Wolverines beat out Alabama, Auburn, Georgia, and Notre Dame, among others. He was a U.S. Army All-American and then enrolled early in Ann Arbor. During the spring, he looked like perhaps Michigan’s best receiver, and he was a go-to target, at least against fellow freshman Benjamin St-Juste.

Black looked faster than I expected from him in the spring game, and there are some who think he has looked like Michigan’s top wideout. I can’t see anyone arguing that he’s lower than fourth, which is still pretty solid for a true freshman receiver; personally, I think he’s one of the top two guys on the outside and should start this coming fall. He has good speed and very good size, and he’s a solid route runner. He has been more impressive than superstar classmate Donovan Peoples-Jones, but it’s hard to rank any freshman receiver too highly. After all, Michigan’s best freshman receiver was Mario Manningham in 2005, when he had 27 catches for 433 yards and 6 touchdowns. I don’t think Black’s yards per catch will supersede Manningham’s 16.0, but I expect roughly similar production.