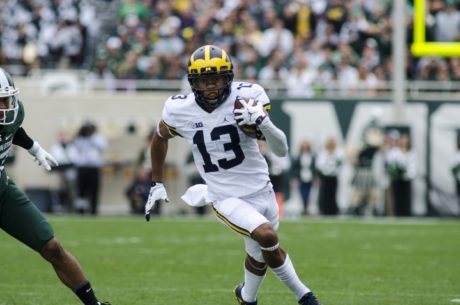 McDoom entered 2016 with some uncertainty surround his utilization. Was he a slot receiver? Was he an outside guy? Was he big enough? Could he return kicks or punts? Yes, no, I guess, I guess not. Michigan tricked everyone by turning a bunch of Jehu Chesson jet sweeps into Eddie McDoom jet sweeps, and the only thing missing was, sadly, a reverse from one to the other. Alas, we had to settle for McDoom averaging over 10 yards per touch, and the jet sweeps opened up some things in the run game. He had 33- and 20-yard rushes against Michigan State, but his usefulness waned late in the season when he had just 3 carries for 10 yards and zero catches over the final four games. Michigan’s coaching staff did not seem to trust his involvement in the passing game, and it showed.

The buzz about McDoom has been somewhat reserved, and I don’t think he’s taken the steps forward that perhaps I expected in the 2016-2017 off-season. With Michigan losing two starters on the outside, that should free up some room for some playing time. He played some outside receiver in the spring, and he also has the ability to play in the slot. The only catch he made in the spring game was a 31-yarder on a fade route over the head of freshman Benjamin St-Juste. He did hurt his ankle on that play, but he is expected to be full go for fall practices. I think McDoom can continue his jet sweep duty, and I think he will expand on those 5 catches from last season. I do believe he’s the most talented “slot receiver” on the roster overall, but I’m not expecting a step forward to stardom just yet. Maybe he can build on his rapport with Wilton Speight for next year.