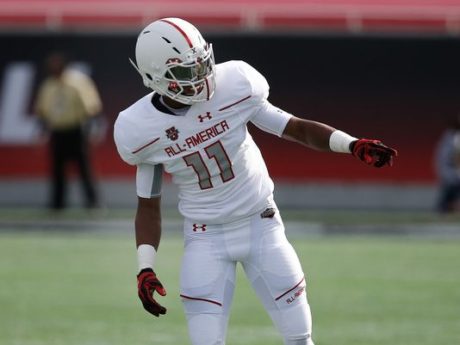 Today is Amazon Prime Day (LINK), so if you’re visiting Amazon to get some deals, please consider using the links here at TTB. Thanks!

I am pretty unabashed about my high hopes for McDoom, who not only has an awesome name, but can also play football pretty well. He originally committed to Oregon, even though I heard that Michigan was his leader. He then decommitted from the Ducks over the winter to flip to the Wolverines. In the meantime, he played in the Under Armour All-America Game, scoring a touchdown against other elite talents.

I’m only putting McDoom down at #60 because Michigan has some other talented receivers, many of whom are more experienced. The two primary guys are Jehu Chesson and Amara Darboh, but Grant Perry, Maurice Ways, and Drake Harris have also played a significant number of snaps. Add in the multiple-tight end sets and a large crew of incoming receivers, and the need for McDoom isn’t that great. Freshman receivers often contribute, and I think McDoom has the talent to do so. I think he could play in the slot, he’s a good route runner, and he might be able to help out on kickoff returns. But I think his chances to contribute will increase significantly in 2017, after Chesson and Darboh have moved on.