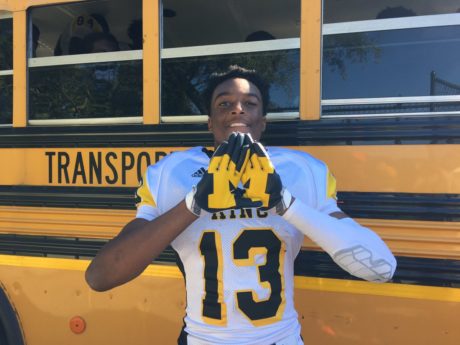 Thomas was a highly sought after recruit within the State of Michigan, but for a long time, it seemed like he was heading out of the region. He made some noise early about going down to SEC country or the west coast, and they seemed like very real possibilities. I’ve had my eye on Thomas for a few years, because he’s lightning fast and played like the fastest player in the state since he was a sophomore. Michigan was able to reel him in a year after landing fellow King alum Lavert Hill, and he’s one of the top few prizes in the 2017 class.

Thomas enrolled in January and spent the spring looking like a lanky tenth grader out on the field. Even the listed weight of 171 lbs. might have been stretching it, so he needs some time in the weight room. Will he have a chance to spend enough time in the weight room before he needs to see the field? Doubtful. Michigan will probably need him to play slot corner throughout this season in nickel and dime situations, and he could be a key backup on the outside. He’s a liability in run support, but he has speed and playmaking ability on third down. The Wolverines lost three cornerbacks from the 2017 class, and nobody has put a stranglehold on any of those spots. Thomas also offers some upside as a punt or kick returner, and potentially as a wide receiver. I don’t think Thomas will be a full-time starter this year, but he may be able to stake his claim for 2018 on the outside over the likes of Hill, David Long, Keith Washington, and others.