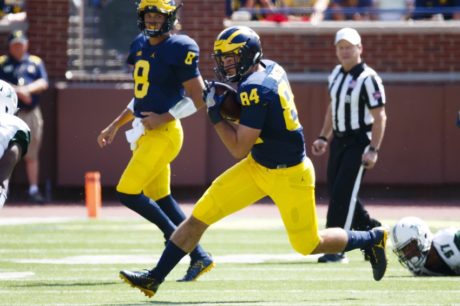 Today is Amazon Prime Day, so consider getting in on some deals through the link(s) here at TTB.

McKeon didn’t contribute a ton to the team in 2016, so nobody would have batted an eyelash if he had redshirted. On the other hand, he earned some quietly rave reviews for his overall play. People within the program are excited for his future, even if he’s not a freak athlete. There seems to be a belief within Schembechler Hall that he will be a solid, old-school tight end by the time he’s done in Ann Arbor.

Michigan isn’t in strong need of contributions from McKeon this year, but he could be the Wolverines’ third tight end behind Ian Bunting and Tyrone Wheatley, Jr. Both of those players figure to play quite a bit in double tight end sets, and McKeon would likely be the next guy in due to injury or perhaps heavy packages. He’s a nice piece to have, since he has the skill set to play in-line tight end, play an H-back role, or split out. I look for his role to increase each year for the next couple seasons before settling in as a starting tight end.