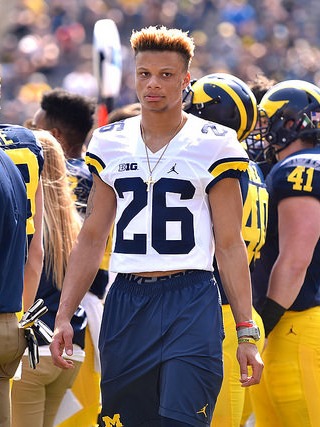 Woods was a bit of an unknown when he suddenly popped up on Michigan’s radar, and he committed to the Wolverines just prior to the 2016 spring game. A large strong safety type, he was known more for his in-the-box play and run support than being wildly athletic. The Wolverines brought him in as an early enrollee in January, and that reputation continued in college. Reportedly referred to as “The Truth” for his hitting ability, there were some practice clips that popped up showing him supporting the run rather well. Unfortunately, an injury prevented him from playing in the spring game, so our chances to see him were limited.

This fall Michigan might need Woods, and they might not. Defensive back is not a particularly dangerous position group for severe injuries, so as long as you can find three safeties and about four cornerbacks, you should be pretty set with your rotation. The defense seems to be pretty set with Joshua Metellus and Tyree Kinnel as the starting safeties, and Jordan Glasgow appears to be the backup strong safety. Woods is probably the #3 strong safety at this point in time, but Glasgow also could play a fair amount of Viper if Khaleke Hudson falters or gets hurt. I do not see true freshman Jaylen Kelly-Powell as a viable option this year, so Woods should probably be viewed as the #4 overall safety. His size and tackling ability make him a potential contributor on special teams, and I think he will offer some value on kickoff coverage.