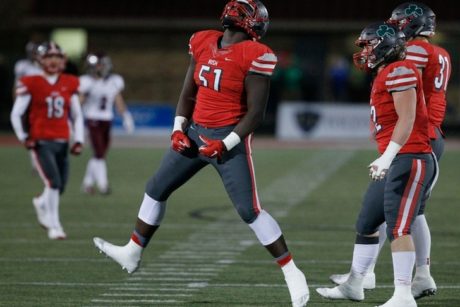 SITE NEWS: First of all, Mike scored an interview with former Michigan tight end Bennie Joppru, so head on over to the message board to suggest some questions (LINK). Second, we have 49 avatars uploaded right now, so when one more user feels frisky, we’ll have the drawing for the $50 Amazon gift card.

It takes a while to review 30 recruits’ senior film, not to mention the time to try to piece it all together. So a couple months after National Signing Day, here I offer the final TTB Ratings for the class of 2017.

Hit the jump for the Final TTB Ratings in the class of 2017.

Cesar Ruiz – C: 99
I’m keeping Ruiz right where he started. He might not be a first-rounder in the NFL draft, because centers tend not to get picked very high. But with this coaching staff, he should be ready for the NFL in four years.

Donovan Peoples-Jones – WR: 92
I still don’t believe that Peoples-Jones will put up the impressive kinds of numbers that will launch him to All-America status in college, but he should be a very productive wideout who will be a good NFL prospect.

Dylan McCaffrey – QB: 91
I don’t necessarily see McCaffrey as a national superstar and future #1 overall pick, because teams usually don’t seem to draft quarterbacks that high who don’t have elite arms. McCaffrey is polished and confident and a good athlete, but his arm strength and release are only above average, not elite.

Luiji Vilain – DE: 90
If you start on the defensive line at Michigan, you’re bound to be pretty damn good. Vilain might have to wait a couple years until a spot opens up, but then he should be terrorizing opposing quarterbacks full-time.

Aubrey Solomon – DT: 89
I really like Solomon, but with the way Michigan rotates defensive linemen, I don’t know if he’ll put up the kind of numbers that one might expect from an All-American.

Chuck Filiaga – OT: 86
Filiaga has a lot of upside, but he has a lot of technical things to work on. He’s similar to Ben Bredeson in stature, but not quite as technical right now.

Nico Collins – WR: 85
I think this is pretty spot-on for Collins. He’s not an extremely natural receiver or superb athlete who will push his way into elite status, in my opinion, but he’ll be tough for opponents to match up against. He’s not as advance of a route runner as Tarik Black.

James Hudson – DT: 85
Is he Willie Henry, or is he an offensive lineman? I don’t know, but I thought he improved a bunch as a senior and looks like an explosive player on either side of the ball.

Joel Honigford – OT: 84
In case you didn’t catch it when I wrote a post on scouting offensive tackles (LINK), I’m pretty high on Honigford’s athleticism. Even if he ends up at guard or center, I like how the kid moves.

Oliver Martin – WR: 83
There’s talk that Michigan might move toward more of a spread offense, and I would be okay with deploying at least a third wide receiver if that guy is someone like Martin (or a couple other guys on the roster). It’s easy to get slot guys the ball often.

Drew Singleton – LB: 83
I can’t really justify moving him up or down since he missed his senior year due to an ACL tear.

Tarik Black – WR: 82
Black is a little shorter than the 6’4″ he was listed at as a recruit, and I actually find that reassuring because he should be able to maintain some of his relative athleticism.

O’Maury Samuels – RB: 82
I don’t like Samuels any less as a prospect, but Michigan and Jim Harbaugh aren’t known for producing big-time running backs. I think he’ll be a good player, but he might not separate himself from the pack.

Andrew Stueber – OT: 82
The more I’ve seen from Stueber, the more I’ve grown to like him. He’s not the flashiest guy, but he could end up being Michigan’s starting left tackle if Filiaga has to move inside or to right tackle.

Kwity Paye – DE: 81
Paye was a pretty good high school running back, and I like moving those guys to defensive end or linebacker. He’s very raw, but his acceleration off the edge is going to be tough to handle for some offensive tackles.

J’Marick Woods – S: 80
I like the Earnest Shazor comparison, even though Shazor overrated himself a little bit and left early for the draft . . . and then didn’t get drafted.

Brad Hawkins, Jr. – S: 79
I’m liking Hawkins a little more as a safety down the road than I did previously, even though he played wide receiver in 2016. I think his year off helped him a little bit physically. Hopefully he got his academics in order, since he needed a year at prep school.

Joshua Ross – LB: 79
I like his instincts and the way he hits. I didn’t like him quite as much as I liked his brother, James Ross III, as an underclassman, but I think Joshua caught up to him as a senior.

Donovan Jeter – DT: 78
I think Jeter will eventually turn into a 3-tech defensive tackle, but even if he doesn’t, I don’t know if he’ll push ahead of some of the other talent. I think he’ll be a good rotational piece, though.

Benjamin St-Juste – CB: 78
St-Juste should be a good boundary corner at the next level.

Ja’Raymond Hall – OT: 77
This seems to be a good spot for him. He might end up inside at guard, and I like some of the other guys in this class better.

Jaylen Kelly-Powell – S: 77
I don’t see Kelly-Powell being a difference-maker in the Big Ten, but he’s smart, feisty, and somewhat athletic.

Ben Mason – LB: 74
The best case scenario – to me – is that Mason plays fullback for most of his career, but I still think he’s a solid linebacker prospect who seems Desmond Morgan-ish but taller.

Brad Robbins – P: 70
This is a shot in the dark on a punter. Not many punters get drafted, but I think he’ll be pretty solid for the Wolverines.

Jordan Anthony – LB:  69
I’ll be glad for Rivals to prove me wrong, but Anthony looks short-ish to me and doesn’t have great burst.

Phillip Paea – DT: 68
I still see Paea more as an offensive guard, or maybe a center. Michigan is supposedly bringing him in as a defensive guy, but he would still be a 76 to me if he were headed for offensive line.

Kurt Taylor – RB: 57
I think Taylor should be a decent third down back, a guy who can block, catch some screen passes, and run an occasional draw. He’s not a front-line back, in my opinion.

Corey Malone-Hatcher – DE: 49
I don’t necessarily plan to do this every year, but I think this is where Malone-Hatcher will top out in his career at Michigan. I hope he proves me wrong.