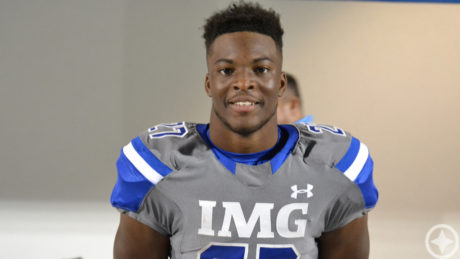 Anthony was a nice win on the recruiting trail for Michigan’s staff. Early on when he lived in Maryland, it looked like he would stay on the East Coast, quite possibly at Maryland. Once he transferred to IMG Academy in Florida, it seemed like he became more open to playing elsewhere. He was rumored to be a silent commitment to Michigan for several months, and he finally made it public in December.

I have some questions about Anthony, partly because of size and partly because of him bouncing around from position to position. He played running back almost exclusively as a junior, and then he returned to the linebacker position as a senior. Rivals saw enough out of him to bump him up to a 5-star prospect, which is a little surprising for a guy who’s probably not even 6’0″ and who doesn’t seem to have truly elite athleticism. Those questions aside, I do have Anthony ranked as the most likely freshman to contribute in 2017. He has the positional flexibility to contribute at either WILL or SAM, and Michigan has a need for contributors at both positions. I also think he has the quickness to overcome some size deficiencies, and we saw a similar player (Devin Bush, Jr.) contribute last year.