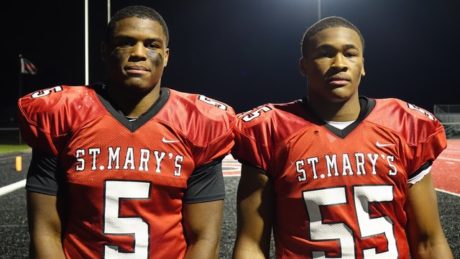 Thanks to Peter for the Paypal donation!

Ross, whose older brother James also played at Michigan, seemed like a lock to also be a Wolverine. And yet. He dragged his feet a little bit, flirting with the likes of Notre Dame and Oklahoma. It seemed late in the game when he finally committed to Michigan in late March of 2016, although in truth, that was still over 10 months away from National Signing Day. He earned some decent offers without reeling in many big-timers, and he ended up as the #9 inside linebacker and #214 overall in the 247 Composite.

Ross has a good chance to play this season, even if he is a bit undersized for a MIKE linebacker. Michigan plans to use him in the middle, and he’s not as athletic as Devin Bush, Jr., who played as a true freshman last season, mostly at WILL. The Wolverines had three guys in the spring that they seemed to trust in Bush, Mike McCray II, and Mike Wroblewski, but I think Wroblewski will get passed by someone, whether it’s Ross or another freshman. Both McCray and Wroblewski will graduate after this season, so Michigan needs to groom two or three guys who can start or be heavily rotated in 2018. I think Ross will play some, but there are other guys who should be able to fill in if needed, too.