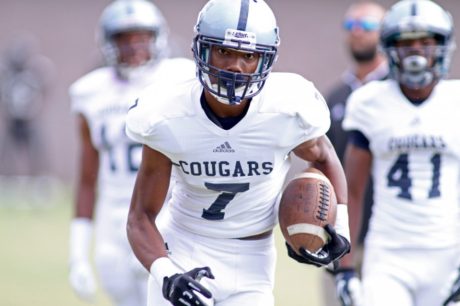 SITE NEWS: This initiative has fallen off somewhat, but remember that you can upload avatars. We currently have 61. When we get to 75, there will be another drawing for an Amazon gift card.

The recruitment of Collins was a bit of a strange one. Michigan offered, he visited, and he loved it. He was rumored to be a silent commitment for several months, but then a late surge from Georgia seemed to pull him away. On a visit to Athens, he apparently was told some bad news that they couldn’t take him, and he ended up signing with the Wolverines. He might be the least hyped receiver of Michigan’s four wideouts in the class, and yet he’s a 247 Composite 4-star, the #23 wide receiver, and #136 overall.

Collins is a large receiver, though not quite big enough to warrant rumors about switching to tight end. He’s not amazingly fast or shifty for his size, but he’s a huge target with a wide catching radius. He’s more likely to fend off defensive backs with a stiff-arm than a burst of speed, and that might be a good complement to the other guys on the roster. Recent experience with large receivers makes me think that he won’t be a heavy immediate contributor, but redshirts also seem to be a rarity. I think Collins will play this fall, but Michigan probably won’t rely on him for a ton of production.