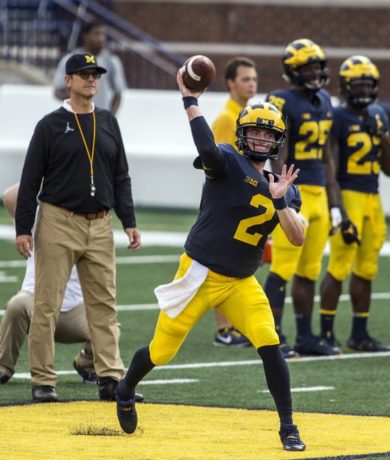 So much has been said about Patterson that there’s not much left. He was the starter at Ole Miss last year before getting injured, and then there was a whole bunch of idiocy going on at Ole Miss, and he got out of town (as did several of his teammates). He passed for 300+ yards in five out of seven games, and he had 400+ passing yards twice. In the two games where he was below 300 yards, he completed fewer than 50% of his passes, threw 0 touchdowns, and threw 5 interceptions; those games came against #1 Alabama and #18 LSU. Was that a function of those teams being very good? Was it because Ole Miss wasn’t good? Does Patterson just fold in big games? It’s hard to say.

One thing is for sure, though: there are going to be plenty of big games for Patterson to prove himself at Michigan, whether it’s Michigan State, Notre Dame, Penn State, Wisconsin, or Ohio State. I initially thought Patterson would have a great season this year with all the tools available to him, including a few good tight ends and a bunch of talented wide receivers like Donovan Peoples-Jones, Tarik Black, Eddie McDoom, Grant Perry, Nico Collins, etc. Unfortunately, McDoom transferred and Black is on the shelf with a broken foot. I think Patterson’s season may be trending downward, but if I could put him even higher on this list, I would. With every receiver that drops out of the picture, that raises the importance of having Patterson healthy. Patterson is a guy who can extend plays, which can help guys with maybe a little less talent get open. Michigan is undoubtedly going to roll out some walk-ons or young guys who aren’t quite ready, but that’s the nature of the game sometimes. I expect Michigan’s offense to evolve a little bit this year, become a little more up-tempo, and become more spread-oriented. Patterson is likely going to throw some silly interceptions and take care of the ball less than what we want as fans, but sometimes his gambles will pay off in big ways, too.