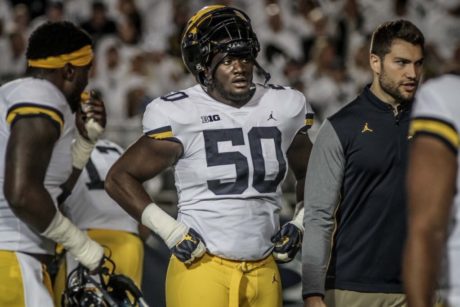 Dwumfour battled shoulder problems going into the 2017 season, and he did not earn a heavy rotation spot throughout the year. He played in nine games and made 4 tackles. Maurice Hurst, Jr. ate up a ton of snaps early in the season at nose tackle, and the Wolverines have good defensive linemen every year. I ranked Dwumfour #23 based on off-season hype and uncertain depth on the interior.

It’s the same story this year. For the second year in a row, we have heard Dwumfour described as another Hurst. Hurst himself didn’t really flash truly impressive play until his redshirt sophomore year, and that’s where Dwumfour is now. This ranking is based entirely on hype. If Dwumfour is a Hurst clone, he probably deserves to be ranked higher. But we haven’t seen anything in his limited time on the field to indicate he has truly achieved that level of elite play. The hope is that Dwumfour can be a star, because the other interior linemen – Aubrey Solomon, Bryan Mone, Donovan Jeter, Carlo Kemp, Lawrence Marshall, etc. – have not shown star power yet, either. It’s a talented group overall, but somewhat unproven.