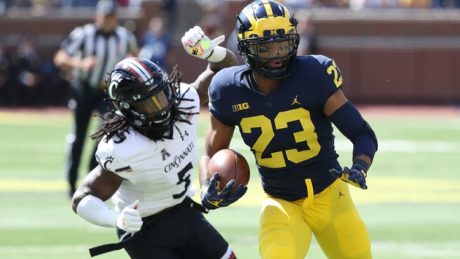 Kinnel pulled off the nearly impossible feat of making my prediction exactly right when he made 70 tackles. In fact, up to this point, he’s about what I expected from him coming out of high school. The safeties were the weak spot on the defense in 2017, even though they were far from terrible. Kinnel was beaten on some slot fades, and he was taken to the house a couple times. As a safety in Michigan’s aggressive, man-to-man defense, those things are going to happen sometimes. Kinnel is usually a guy who’s in the right place, but he doesn’t have great height or makeup speed, so if a team can beat him initially, he’ll probably stay beaten.

This year nobody looks to be challenging him for his starting position, and that seems about right. Michigan is very inexperienced at safety behind Kinnel and Josh Metellus. The most experienced guy is Utah transfer Casey Hughes, who has mostly played corner during his career. Sophomores Brad Hawkins, Jaylen Kelly-Powell, and J’Marick Woods all got playing time last year; Hawkins and Kelly-Powell have received hype this spring and summer. I still believe Kinnel will start, but with sophomores as backups (instead of freshmen like last year), I think Michigan should be a little better off at safety this season with less of a drop-off if Kinnel goes down.