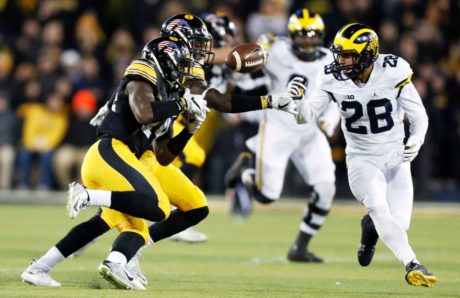 Watson had a pretty solid season in 2017 and showed what an additional year of development can do for a defensive back who’s not a top-notch athlete. Watson was a liability in 2016 and was always a step or two slow. He played a lot in the slot, and that hurt him a little bit because he couldn’t be physical with wide receivers. It’s a little tougher to be a physical cover guy in the slot, because receivers have a two-way go, and they often start off behind the line of scrimmage. Last year Watson played a little more on the outside, and I thought he did a better job of recognizing routes. Maybe he watched more film or improved his formation recognition or just got more technically sound, but he became a solid corner. He doesn’t have the speed or playmaking ability of Lavert Hill or David Long, but he’s a solid player at this point.

Watson returns as a fifth year senior, even though he has virtually no hope of starting. He’s one of several fifth year guys who could probably go to a lot of other schools and start. He should get a lot of snaps on defense, and he’s also heavily utilized on special teams. Michigan has a large number of defensive backs, but Watson and fellow backup Ambry Thomas should both be key members of that defensive backfield. College football teams love to throw the football all over the field, and Michigan has at least four decent corners. In fact, this cornerback group from #1 through #4 might be the most talented group altogether that Michigan has had in the last 25 years or so. Watson’s not a game-changer in the commonly accepted use of the term, but he gives Michigan a starter-quality option in case Hill or Long gets injured along the way.