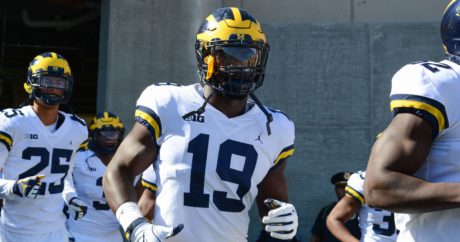 Paye came a long way in one year, and I think that portends a very positive future. He made a huge jump in competition level coming from Rhode Island to the Big Ten, but his overall athleticism was enough to get him on the field for eight games. That’s a lot more playing time than many generic 3-stars get as true freshmen, and he didn’t look out of place. He had a half-sack against PSU and another half-sack against Rutgers. (By comparison, Rashan Gary had 27 tackles, 5 tackles for loss, and 1 sack as a true freshman, and Chase Winovich redshirted . . . at linebacker.)

Paye is on a good track to success, and the main competition to be the primary backup at weakside end will probably come from redshirt freshman Luiji Vilain. Vilain is an unknown commodity at this point after redshirting in 2017, partly due to injury. I’m sticking with the guy who saw the field already, and that’s Paye. Starting weakside end Winovich has an excellent motor, so I don’t think Paye is going to get starter-level snaps, but he should get plenty of opportunities to make an impact. He could very well be the heir to Winovich’s job for 2019.