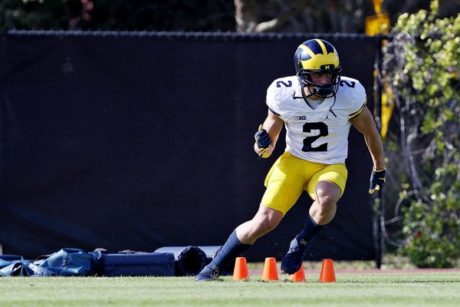 Last year I expected Martin to play without being a huge factor on the field, but he was the lone receiver from the 2017 class not to play. Injuries were a part of that. He wasn’t totally healthy throughout the year, and Michigan’s need at slot receiver wasn’t huge.

Hype for Martin has increased this off-season, and he should find a decent chunk of playing time. One piece of evidence is that rumors were floating around that incumbent slot receiver Grant Perry was exploring transfer options. Perry opted to stay and will almost surely play a large role, but he’s hearing footsteps. Furthermore, Michigan lost Maurice Ways, Drake Harris, and Kekoa Crawford since last season, and the only replacement in the 2018 class was Ronnie Bell. Ways and Harris barely played, and Crawford was a disappointment, but there’s still room for someone to take some snaps that were vacated. I don’t expect Martin to be heavily targeted, but I think he’ll be an enticing option for the future and we should get a glimpse of what Michigan will have in store when Perry graduates.