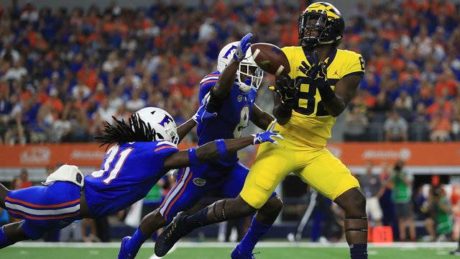 Eubanks started off last season with a bang. He caught passes of 48 and 13 yards against Florida, even as a backup. Then he suffered a couple injuries after the first month of the season and his year quickly came to an end.

This year the tight end position is still crowded, even though Michigan has lost Jake Butt, Devin Asiasi, and Ian Bunting over the past two off-seasons. Sean McKeon and Zach Gentry are the two front-runners at tight end, McKeon as an in-line guy and Zach Gentry as more of a flex threat. Michigan has other options with Tyrone Wheatley, Jr., Mustapha Muhammad, and others. Eubanks was fourth in catches among tight ends last season (behind McKeon, Gentry, and Wheatley), but his usage in the opener implied more if he had been able to stay healthy. There’s a chance he will move ahead of Wheatley, but McKeon and Gentry are pretty strongly entrenched. Eubanks will probably have to wait his turn until those guys graduate or leave for the NFL.