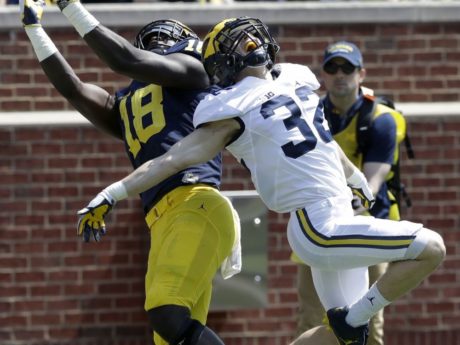 Eubanks was skinny and raw entering college last year, so I was a little surprised when he trotted out late in the game against Central Florida last year and burned his redshirt. Then we started to realize that Jim Harbaugh doesn’t care too much about redshirting. Technically, Eubanks might be a sophomore this season, but considering he only played in one game, I imagine Michigan will be aiming to get this year back for him if they want him for a fifth year down the road.

This year the chance for Eubanks to play has increased. Not only is Jake Butt off to the NFL, but he was able to do some of the flex tight end stuff that Eubanks is most suited to run. And on top of that, Devin Asiasi – the top-rated tight end in Michigan’s 2016 class – ditched Ann Arbor for UCLA. Presumed starter Ian Bunting was a wide receiver for much of his high school career, and he might be able to flex out, but he’s mostly an in-line guy at this point. The two guys most likely to detach from the formation are Eubanks and Zach Gentry. Gentry, a former quarterback, is faster and more athletic, but he has struggled with his hands and still might need to add some weight. I was not impressed with Eubanks’s route-running or instincts in the spring game, but he’s still just a young’n.