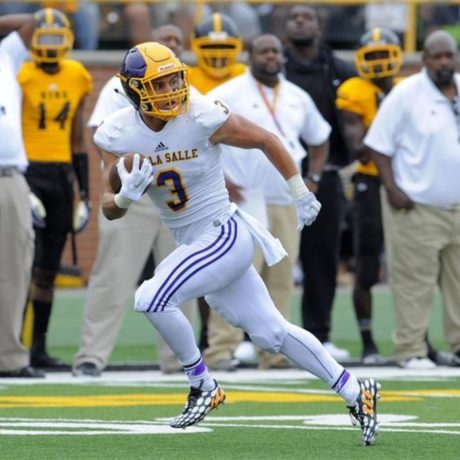 Wilson played some defensive back last season before transitioning to offense, perhaps permanently. By the end of this past spring, he had worked himself up to being the #3 running back on the depth chart, behind Karan Higdon and Chris Evans, but ahead of O’Maury Samuels, Kurt Taylor, and others. I am leery of walk-on-type running backs, because we’ve seen players like Joe Hewlett get a bunch of spring-time snaps that disappear entirely when it comes to the season. Whether it’s a motivational ploy, due to injury, or because of some other factor, these walk-ons usually end up on the sideline or playing on special teams.

I can’t put out of my mind that Wilson was a Semper Fidelis All-American coming out of high school, though, and he had several FBS offers. He’s not an average walk-on. Samuels was dinged up a little this spring, but maybe Wilson really has passed him up on the depth chart. Maybe Wilson was slowed in previous chances by not practicing on offense full-time, so maybe a permanent switch will help him play a little faster. I mentioned the other day that Ty Isaac and Kareem Walker vacated 108 carries from last season, so someone will have to eat up some of those carries behind Higdon and Evans. I’m not sure it will be Wilson, but he has a chance to do it, and he can also play on specials.