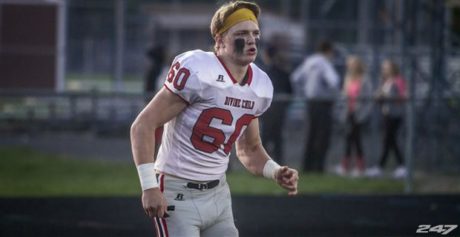 Dearborn (MI) Divine Child defensive end Aidan Hutchinson committed to Michigan on Tuesday night. He chose the Wolverines over offers from Louisville, LSU, Michigan State, Nebraska, and Wisconsin, among others.

Hit the jump for more on Hutchinson’s commitment. 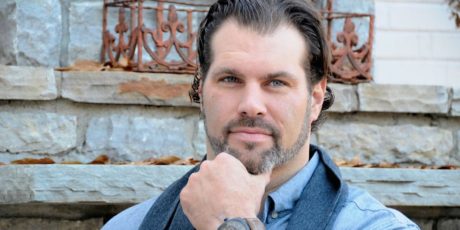 You are not the father.

Anyway, Aidan was considered a shoo-in for Michigan once they offered, and I put in a Crystal Ball for him last June. His dad loved Michigan and stayed in the area, and Aidan didn’t seem as enthusiastic about visiting other schools. He did take some visits, including a recent trip to Notre Dame, but that Notre Dame visit apparently sealed the deal for the Wolverines. Thanks, Brian Kelly!

I recently ranked Aidan as the #1 player in the State of Michigan for 2018 (LINK), so I’m pretty fond of his game. He’s not on par with Donovan Peoples-Jones or even Ambry Thomas from the 2017 class, but he’s got some skills as a football player. Aidan has a tall frame with long arms, and he does a great job of using his hands to shed blockers, slap their hands away, disrupt passing lanes, etc. He shows some solid short-area quickness, and he does a good job of bending off the edge to chase down the line. He’s an aggressive tackler, and one of his best traits is the motor he shows to chase plays down from behind, even when a guy who runs a 5.11 forty would usually be out of the play.

On the negative side, Hutchinson’s probably not going to create a ton of pass rush off the edge. He’s limited with his speed, so he’ll have to be more of a technician and bull rusher. He has put on some weight this off-season, but even when he was listed at 6’5″, 234 lbs. during his junior season, he looked rather willowy. He needs to get in the weight room and work on both his upper body and lower body strength.

I might be short-changing Hutchinson, but I’m reminded of Dan Rumishek, whom some of you might remember from the early 2000s. Rumishek’s best career year was 2001 when he made 42 tackles, 8 tackles for loss, and 7 sacks. He also managed to make two interceptions in his career. He was one of those guys who was a little slow for defensive end, but played a little too light to be a defensive tackle. Hutchinson could play some 3-tech if his body develops that way, but he’s more likely a strongside end (despite Rivals ranking him as a weakside guy). Without the explosiveness of someone like Chris Wormley, his ceiling is limited, but he can still be a very good college player.

Michigan now has three commitments in the 2018 class, as Hutchinson joins Indiana offensive guard Emil Ekiyor and Georgia safety Otis Reese. As of right now, the class has room for 9 players (CHART) but that number will certainly increase. There are no senior defensive ends on the roster for 2017, and with the haul Michigan got in the 2017 class, there might only be a need for Hutchinson and maybe one more guy.

This is what daddy looked like back in the day:

TTB Rating: I won’t give a rating until I update the 2017 class ratings.