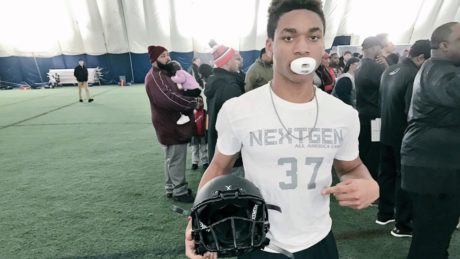 Hit the jump for more on Seldon’s commitment.

Seldon started popping up on the radar as a freshman when some MAC programs started offering, but he was listed at 5’7″ and 150 lbs. at the time. That lack of size made it questionable whether he would start getting big-time offers. Michigan’s coaching staff has received some criticism for failing to offer Belleville players early, which has reportedly led to friction between the staff and some of Belleville’s bigger stars, like Julian Barnett (Michigan State) and Devontae Dobbs. Seldon camped at Michigan on Tuesday, and he didn’t take long to pledge to the Wolverines.

Seldon is about what one would expect from a 5’9″, 160 lb. player earning big-time offers. He’s small, quick, and fast. He has excellent hips to stay with receivers, and he shows a great understanding of how to play defensive back. He gets good position on receivers, tracks the ball well in the air, and shows some nice ball skills. He’s not afraid to hit people, and he does a nice job of using his hands to shed blockers.

Seldon is always going to battle questions about his size, and he may struggle if he’s matched up against bigger receivers in college. It would be nice to see him grow an inch or two, and he will have to continue getting stronger to counteract the size issues.

Overall, this is a solid catch for the Wolverines, who will be replacing both starting cornerbacks by 2020 (if not sooner). They have been going after big corners, but the starters are 5’10” and Michigan has done just fine with them. While size sometimes seems like a major issue, I think Seldon is feisty enough and tough enough to get the job done. He could play field corner or match up with teams’ slot receivers, and he has the skills to be an effective punt returner, too.

Michigan now has two commitments in the 2020 class, when they had zero up to 24 hours ago. The class should be at least 23 players strong (LINK). Seldon would be the first Belleville product to play at Michigan since the mid- to late 1990s when running back/linebacker Ian Gold wore the winged helmet.

TTB Rating: I will not be posting TTB Ratings for the 2020 class for a while.